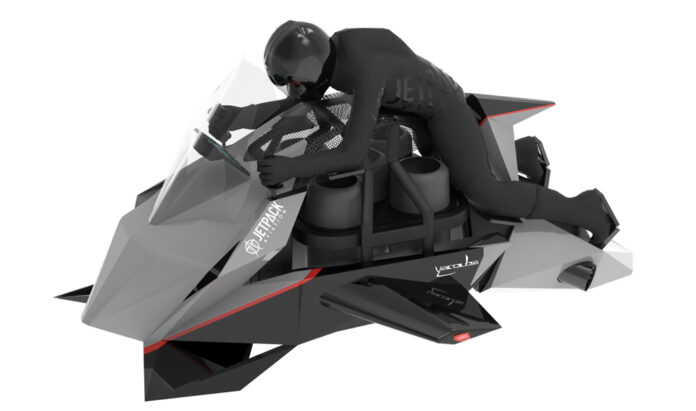 Back in 2015, JetPack Aviation made a ton of news when it launched its first product, the JB-9, which consisted of a pair of backpack-mounted jet engines and was built for personal flight. Since this time, the team at JetPack has been hard at work refining its technology and preparing for a limited commercial run of the JB-9. More importantly, JetPack has been quietly working on one of the coolest concept vehicles we have seen in a long time: a flying, jet-powered motorcycle. Recently unveiled in a YouTube video, the Speeder, which clearly got its inspiration from the awesome flying motorcycles used throughout the Star Wars universe, is still just a concept vehicle. However, this doesn’t mean that avid fans of futuristic technology will be left out in the cold.

As of today, JetPack Aviation is currently taking preorders for commercial versions of the Speeder flying motorcycle, which should be available for purchase at some point in the next couple of years. For those looking to reserve this futuristic floating motorcycle, it will set you back a cool $10,000 for the preorder deposit to reserve your very own Speeder. This may seem like a high price tag, but it pales in comparison to the expected price tag of $380,000, which underlines just how advanced the technology behind this personal transportation device will be upon its release.

For those interested in getting their hands on a speeder, we suggest putting down the $10,000 preorder payment now, as only twenty of these sweet motorcycles will be made available for commercial use. This is due in large part to the Speeder’s high price tag and the super advanced technology that will be going into it. This limited production run makes more sense when one considers the fact that the Speeder is intended to be a military-grade vehicle capable of autonomously transporting troops and supplies in its cargo configuration.

If you’re not able to drop $380,000 on a new toy right now, no worries, as we aren’t either. Still, the very idea of a flying motorcycle is enough to get us excited for what is promised by the future of personal transportation vehicles. As it stands now, the ultralight version of the Speeder will be able to fly at speeds of over 60 miles per hour.

As if that isn’t impressive enough, as it stands currently, the Speeder will be capable of reaching altitudes of 15,000 feet, which is a little less than half of the cruising altitude for commercial airplanes. Needless to say, the vehicle would make for a thrilling joy-ride experience!

With the first Speeder prototype set to be completed within 14 months, chances are we will not have to wait long to see this awesome machine in action. While the JetPack Aviation Speeder might be a little outside of many of our price ranges upon its release, the development of a flying motorcycle is still notable. If nothing else, it gives us hope that we will one day be able to zoom around in flying cars and other vehicles at some point soon.